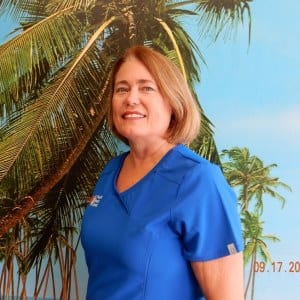 After high school, Brenda joined the Lee County Tax Collector’s office and worked in various positions. Her last years there were spent as the lead manager of a large special assessments department. Her skills in customer service, record keeping, payment processing, staff management, and all things clerical were enhanced and developed during her employment.

After resigning from the Tax Collectors office, Brenda took a position as administrative assistant at her local Fort Myers church. She loved being involved in the church life, and also in serving the pastors and members. Brenda also served as the singles ministry leader until she married Mark.

In 2003, Brenda met Mark at a church event (sounds like a movie title).  They were joyfully married 9 months later.  In 2005, they moved to Englewood, FL where they built a successful hearing aid business from the ground up.  Englewood was a delightful place to live.  After ten years, and with three offices up and running successfully – they were made an offer they could not refuse.  A Corporate Hearing Aid Center purchased the business.

Shortly thereafter, the decision was made to move back to Orlando, Mark’s previous hometown.  The grandchildren, who live in the Orlando area, were a big motivation for the move. Shortly after arriving in Orlando, Mark & Brenda started Preferred Hearing Centers and have built it into one of the most successful hearing aid offices in Florida.

The role of nana is the best position Brenda has ever had, and spending time with her grandchildren is her favorite thing to do.  Her hobbies include reading, walking, and cycling.  She is an avid nature lover and enjoys time on the beach or hikes in the woods.  She and Mark currently attend Embassy Intl. Church in Orlando where they serve in several capacities.

It’s the small things that often hold us back from being able to make a decision. If you have a question, a concern, or you’re unsure about something – then we’re here to help.

Simply complete this form and when one of our hearing care experts is available between appointments, they will call you for a friendly no-obligation conversation to answer your questions and help

With two convenient locations in East Orlando and Winter Springs, one of our offices is in your neighborhood, with each location housing a team of advanced Hearing Care Professionals.

With free parking, comfortable modern waiting rooms, and a friendly team to welcome you with fresh coffee, you’ll instantly feel at ease.