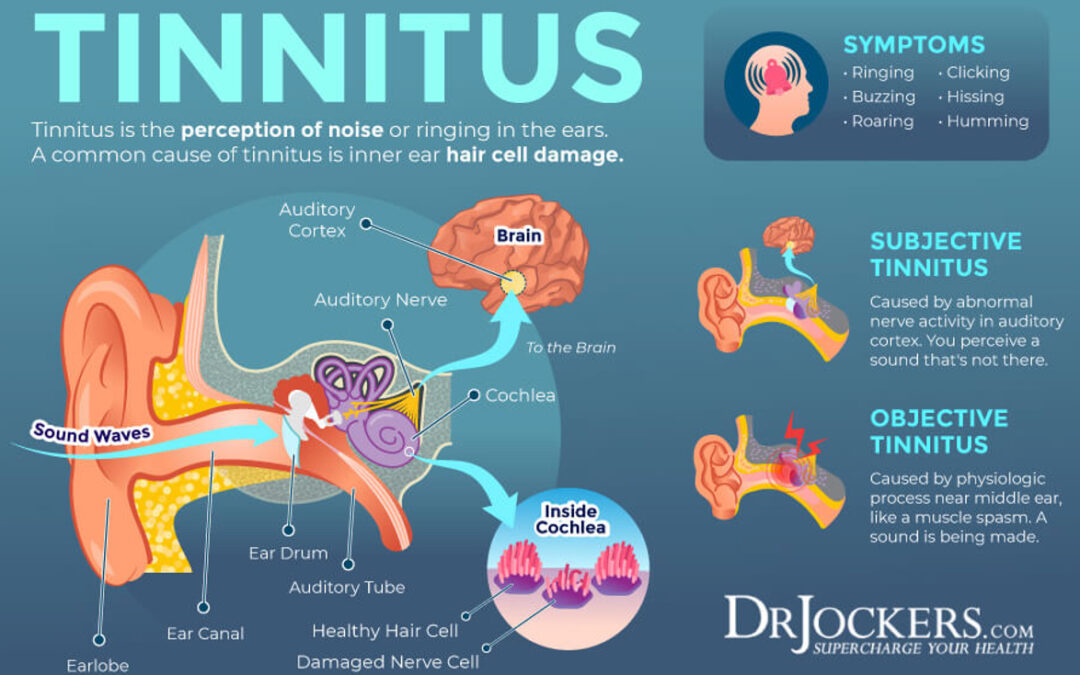 It is estimated that 25 to 30 million American Adults experience the very disturbing condition known as “Tinnitus” on a regular basis. Tinnitus essentially takes away the opportunity for the person to experience quiet, and this can be very distressing.  For some people the problem is severe enough that it impacts their everyday life.

Tinnitus is a perceived sensation of a ringing, roaring, buzzing, chirping, crickets, or humming sound without any actual acoustical stimulation. It is a sound in the ear(s) that can only be heard by the patient. Tinnitus is a symptom associated with many forms of hearing loss. It can also be a symptom of other health issues. Some cases of Tinnitus are so severe that it interferes with a person’s daily activities. People with severe cases of Tinnitus may find it difficult to hear, work, or even sleep.

You may have tinnitus if you experience any of the following symptoms.

If you have any of these symptoms, then we recommend you schedule a hearing assessment as soon as possible. Early detection is the best course of action to treat tinnitus and to prevent it from getting worse.

Within the scope of subjective tinnitus, there are different symptoms that a patient can experience. These are the most common:

Pulsatile Tinnitus: The Tinnitus sounds are intermittent, continuous, or pulsating in time with the heartbeat.

Whistling Tinnitus: Whistling is similar to tonal but with a different type of sound which could be a ringing, buzzing, roaring, whistling or a hissing noise. You may hear a ringing still, but it is intermittent, and may fluctuate up & down in intensity.

Beeping Tinnitus:  As the name suggests, you may hear various beeping noises such as a Morse Code type of signal, or even musical notes; and the beeps can be random.

Multiple Noise Tinnitus: This Tinnitus is described as hearing several different types of noises at the same time, or different noises from ear-to-ear.

Most people with tinnitus have some degree of hearing loss. This has led to the theory that one cause of tinnitus may be a compensatory homeostatic response of central dorsal cochlear nucleus auditory neurons that make them hyperactive to any form of auditory stimulus.  In layman’s terms this means that the ears become more sensitive in order to compensate for the hearing loss.  This sensitivity picks up more faint sounds that create the tinnitus. 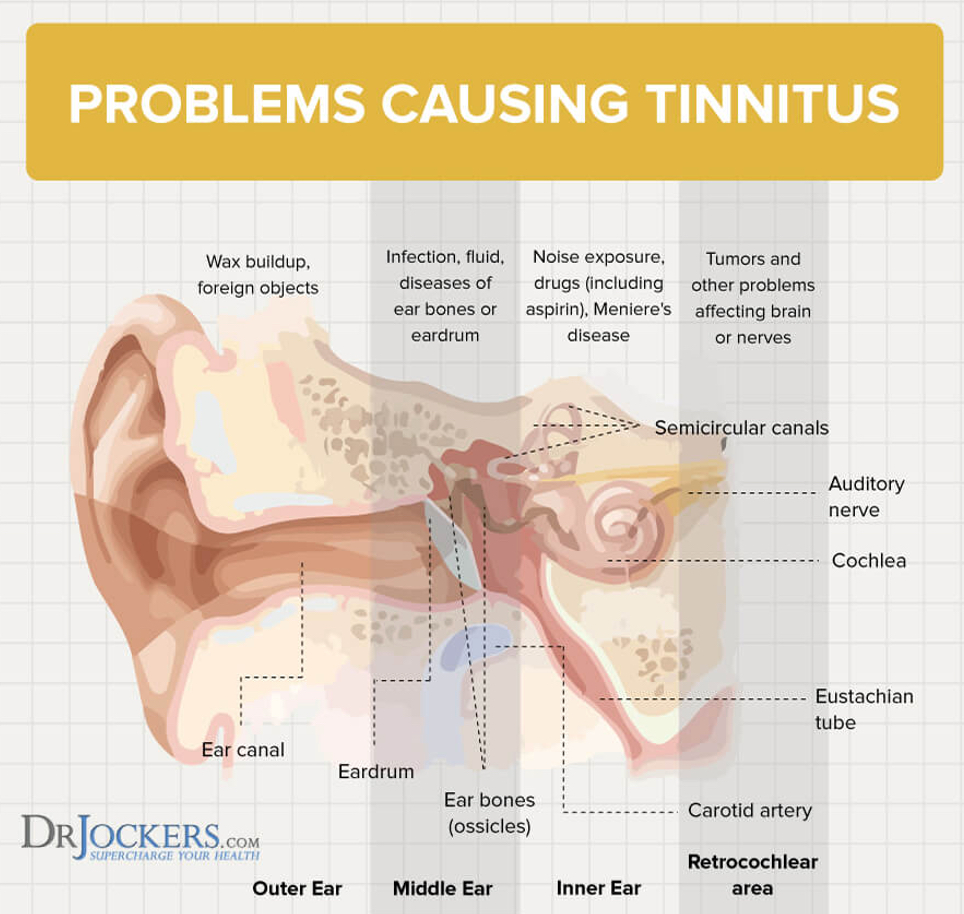 The Most Common Causes of Tinnitus:

There are many causes of tinnitus. The most common of which is hearing loss.  We always recommend patients get a comprehensive hearing exam at the first sign of any hearing issues or onset of Tinnitus, because 90% or more of patients with Tinnitus also have hearing loss. Early detection is the best treatment.

Hearing Loss: Doctors and scientists have discovered that people with different kinds of hearing loss also have Tinnitus. This is a result of wear and deterioration of the nerve cells in the inner ear (Cochlea).  This is usually the first condition that can lead to tinnitus.

Loud Noise Exposure: Too much exposure to loud noise can cause noise-induced hearing loss AND Tinnitus. This could happen over a long period of time of being exposed to loud noises such as occupational noise.  It could also be from exposure to sudden, extremely loud sounds such as a firing of a gun.

Medications: Over 250 medications list tinnitus as a common side effect of usage, including aspirin and antibiotics. Be sure to ask your doctor or pharmacist whether your medicine could be a contributing factor to Tinnitus.

Other Health Problems: Allergies, or in very rare cases: a tumor, problems in the heart & blood vessels, the jaws, or the neck can also contribute to causing Tinnitus.

Inflammation: Another common cause of tinnitus is inflammation and poor circulation within the inner ear. A small amount of inflammation is usually a good thing.  Your body uses inflammation to protect and heal you.  However, if your body is in a constant state of inflammation, that’s where the problems arise. When the body is chronically inflamed, certain inflammatory mediating prostaglandins are secreted in high amounts.

You Must Control Inflammation:

These pro-inflammatory mediators cause an increase in vasoconstriction and platelet aggregation. This decreases blood flow into the smaller capillaries of the body such as the inner ear. This inflammatory process also increases the lymphatic fluid in the inner ear. This combination increases pressure which stimulates the auditory nerve enough to create a series of action potentials that the brain interprets as sound.  The presence of inflammatory-based tinnitus may be a warning sign that the entire body is inflamed, and disease processes are forming rapidly.

Other causes of Tinnitus include: 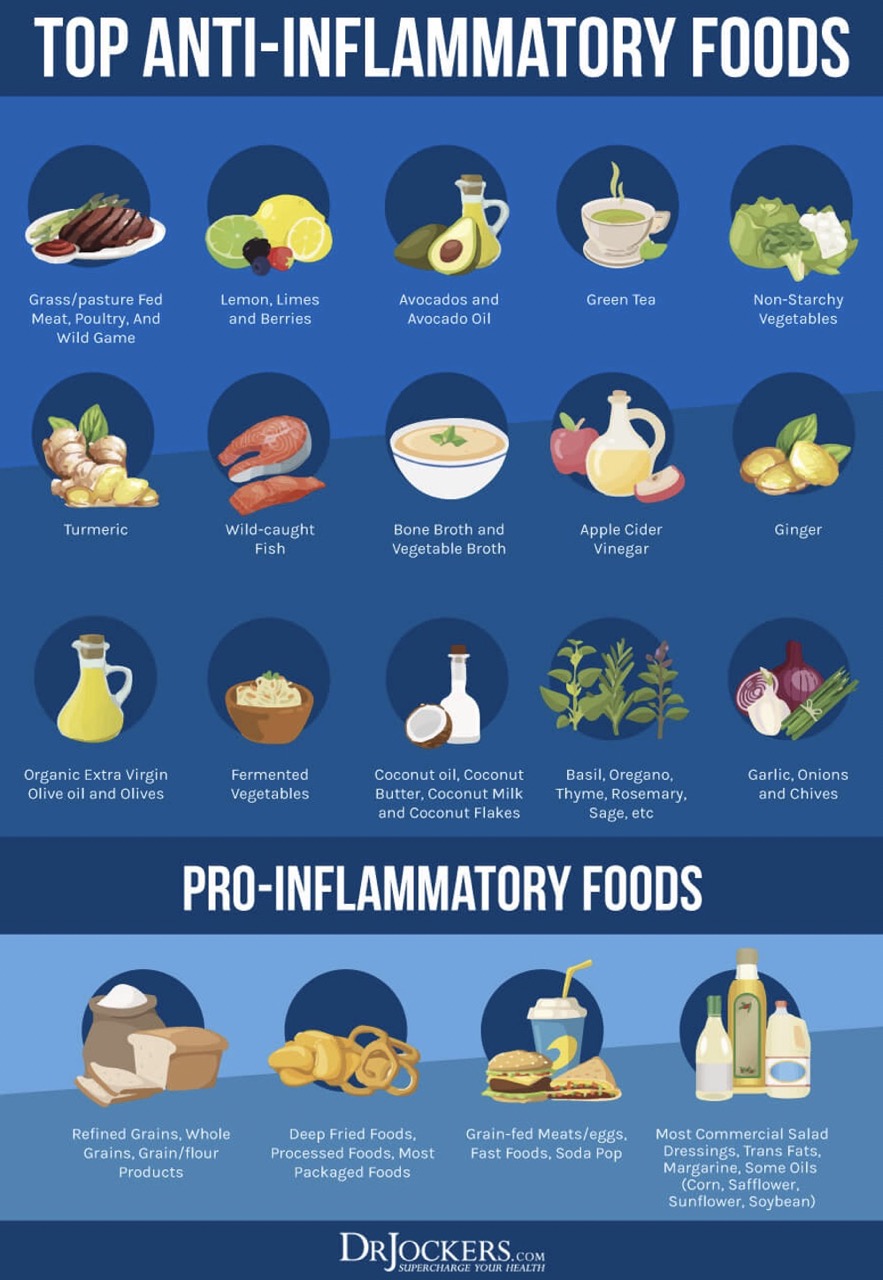 What should I do if I have Tinnitus?

The most important thing you can do is go to see a doctor: preferably an Ear, Nose, & Throat Doc. Your doctor can try to determine what is causing your Tinnitus. They can check to see if it is related to blood pressure, kidney function, diet, or allergies. Your doctor can also determine whether your Tinnitus is related to any medication you are taking.

How will hearing experts treat my Tinnitus?

Although THERE IS NO CURE FOR TINNITUS; scientists, doctors, and hearing healthcare professionals have discovered several treatments that may give some people some relief. Not every treatment works for everyone, so you may need to try several to find the ones that may help you.

Hearing Aids. Many people with Tinnitus also have hearing loss. Wearing hearing aids makes it easier for some people to hear the sounds they need to hear by making them louder and clearer. The better you hear the sounds of life, other people talking or the music you like; the less you notice your Tinnitus. Those amplified sounds that correct for hearing loss, can also help to mask-out the Tinnitus.  Many of the latest technology Hearing Aid Systems have Tinnitus Masking Modules built into the circuitry that can be programmed and set by the Dispenser.  Tinnitus masking can even be adjusted and modified by the patient on a cell phone app.

Sleep: Many tinnitus sufferers report that their tinnitus interferes with them getting to sleep.  It can also make it more difficult to get back to sleep when they wake up in the middle of the night.

Some people sleep better when they use Tinnitus Maskers that can generate a variety of different sounds to choose from.   These are available on cell phone apps such as the “Resound Relief” app and numerous others. Listening to this masking noise at night can help a person ignore the Tinnitus and fall asleep.

Tinnitus Retraining Therapy. This treatment uses a combination of counseling and maskers. An Otolaryngologist or an audiologist may help some people learn how to avoid thinking about their Tinnitus.

It Takes Time for this treatment to work, but it can be very helpful to many people.

Counseling. Some people with severe Tinnitus may become annoyed, depressed, anxious or angry about their tinnitus.  Talking with a counselor or people in Tinnitus support groups may be helpful.

Relaxing. Learning how to relax is very helpful if the noise in your ears frustrates you. Stress can make Tinnitus seem worse. By relaxing, you have a chance to rest and better deal with the sound in your head.

What can I do to help myself?

Think about things that will help you cope. Many people find listening to music very helpful. Focusing on music might help you forget about your tinnitus for a while. It can also help mask the Tinnitus sound. Other people like to listen to recorded nature sounds like ocean waves, the wind, or even crickets.

Avoid anything that can make your tinnitus worse. This includes smoking, alcohol, caffeine and LOUD NOISE.  If you are regularly exposed to loud noise at home or at work, wear ear plugs or special earmuffs to protect your hearing and keep your tinnitus from getting worse.

If it is hard for you to hear over your tinnitus, ask your friends and family to face you when they talk.   Seeing their facial expressions may help you understand them better. Ask people to speak louder, but not shout.  Also, ask them to speak slower and clearer. 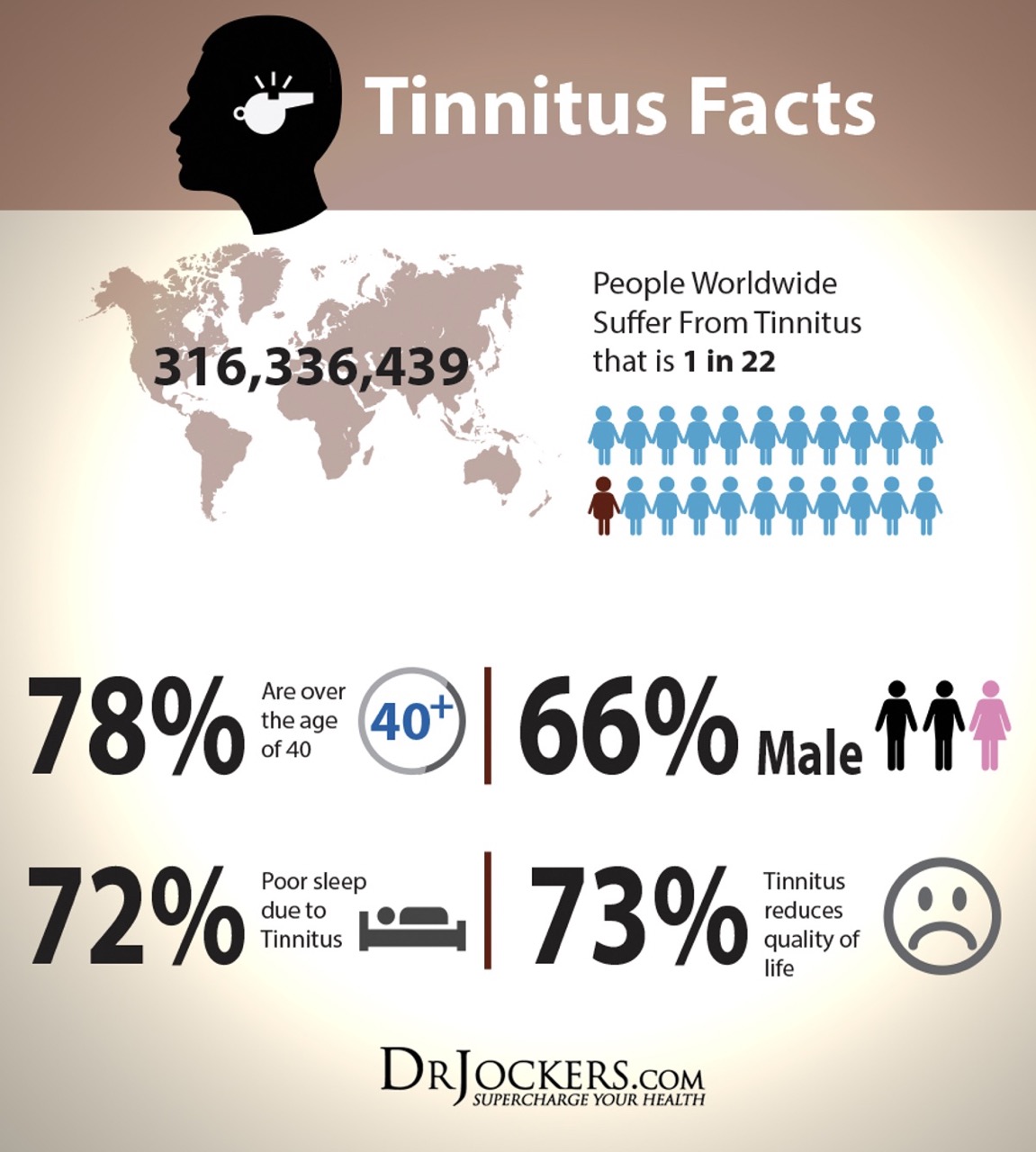 How To Improve Your Tinnitus

The best way to treat your tinnitus is to partner with a team of Hearing Care Specialists such as those at Preferred Hearing Centers.  We have the expertise and knowledge to get your hearing back to a place where you can enjoy your life again and help you manage your tinnitus.

We start with a comprehensive hearing assessment to determine if there is any hearing loss.

If your tinnitus is inflammatory, then the best way to remedy that is by changing your diet. Eating foods such as citrus and berries, grass-fed meats, turmeric, ginger, green tea, and non-starchy vegetables are all proven to reduce inflammation.

If your tinnitus is found to be treatable, we will offer you a hearing aid system that will specifically address your specific Tinnitus issue.

Modern Hearing Aids are far more advanced than the ones your parents used.  They can be programmed to address particular problems that are only relevant to you. Hearing Aids will help your brain focus on the sounds you want to hear.

Where can I get help?

If you or a loved one are exhibiting any of the symptoms of Tinnitus, then please contact us as soon as you can.

Our team is standing by and ready to help get your hearing back to a healthy state. Please call us today at 407-637-5891 or send us an email at PreferredHearingManager@gmail.com

We are available to answer your questions in a friendly and obligation-free office setting.  It is our pleasure to help people with their hearing needs.

For More Information on Tinnitus:

NIDCD maintains a directory of organizations that can answer questions and provide printed or electronic information on tinnitus. Please see the list of organizations at www.nidcd.nih.gov/directory. Use the keywords Tinnitus and Noise-Induced Hearing Loss.